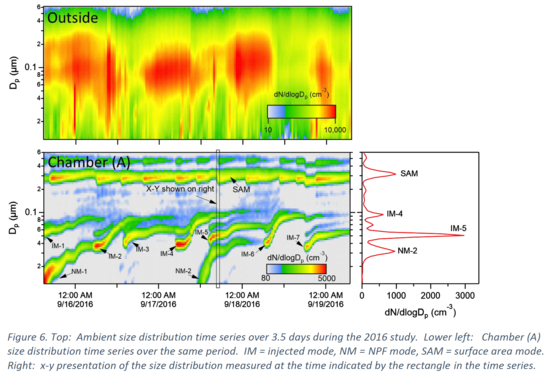 New particle formation (NPF) and growth contribute significantly to total cloud condensation nuclei (CCN) concentrations but exactly how much is debated.  During NPF, gas phase precursors are oxidized and then nucleate to form new particles on the order of 1 nm.  These new particles must grow in size to approximately 50 nm before they can serve as CCN.  Only a small fraction of newly formed particles can grow large enough to act as CCN; the rest are lost via coagulation.  The fraction that become CCN may then activate to form cloud droplets.  CCN concentration influences cloud lifetime, cloud reflectivity, and annual precipitation, thus primary and secondary sources of CCN have an indirect effect on climate.  To better understand the growth and atmospheric processing of new particles in ambient conditions, the 3rd generation of the Captive Aerosol Growth and Evolution (CAGE) chamber will be used. 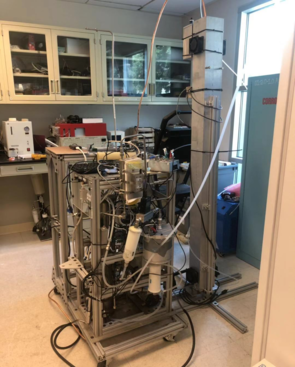 Secondary aerosols, which are comprised of organic and inorganic compounds, play major roles in global climate change, visibility degradation, and human health.  Secondary aerosols are formed by gas-to-particle conversion in the atmosphere (new particle formation by nucleation and condensation of gaseous compounds).  Hydroxyl radicals (OH), ozone (O3), and nitrate radicals (NO3) are the three main oxidants in the atmosphere that react with gaseous compounds to form secondary aerosol.  The mechanisms of secondary aerosol formation, including both inorganic and organic species, are very complex and depend upon atmospheric environments and meteorological conditions.  Oxidation flow reactors (OFRs) have arisen as alternatives to traditional chambers to investigate atmospheric oxidation processes, especially volatile organic compound (VOC) oxidation and secondary aerosol formation. 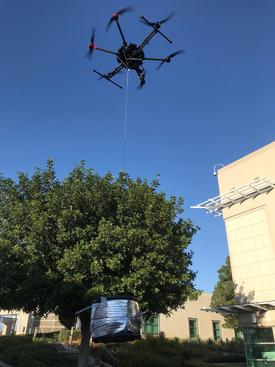 Ozone is formed from photochemical reactions between volatile organic compounds (VOCs) and nitrogen oxides, which in areas such as Southern California come mostly from vehicle exhaust emissions.  The ozone layer high above the earth in the stratosphere helps to filter out ultraviolet light from the sun.  However, ground level ozone can damage the tissues of the respiratory tract, causing inflammation and irritation, and can result in symptoms such as cough, chest tightness, and worsening of asthma.  Although much research has focused on the daytime ozone distribution at ground level, or the total tropospheric burden using satellite sensors, uncertainties exist in the manner that numerical models determine vertical transport of pollutants within the atmospheric boundary layer.  Such uncertainties remain one of the sources of inaccuracies in model simulations.  To measure vertical distributions of O3, and NOx, as well as to detect new particle formation events at different altitudes, an unmanned aerial vehicle (UAV) method will be used.

Secondary Organic Aerosols (SOA), produced through either gas or aqueous phase oxidation, constitute a significant portion of the total aerosol burden in the atmosphere.  The aqueous phase chemical reactions that form aqueous SOA (aqSOA) occur in the presence of fog and cloud droplets and aerosol particles that have absorbed moisture.  Although many studies have been conducted focusing on the properties and production of gas phase SOA (gasSOA), very few have focused on that of aqSOA.  The atmospheric burden of aqueous SOA (aqSOA) is significant relative to that of gas SOA and is abundant enough that it should be further researched.  To study the production rate and properties of aqSOA, the Multiphase Aging and Production of Particles (MAPP) chamber will be used.